How easy is it and how long do I have to wait?

Ashford Borough Council is the largest single provider of allotments in the Ashford Borough area, although there are village sites and, increasingly, community sites run by associations which have leased or otherwise acquired land for allotments. Ashford's Local Plan also requires that housing developments over a certain size also provide and equip allotments. Details of these other allotments providers will be progressively added to this site. 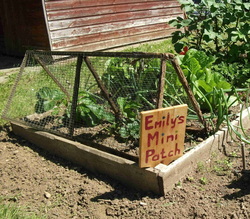 There was a time when there were a lot of vacant allotments in the Ashford area. Those days are long gone. There are currently about 100-200 people on the waiting list for an allotments., and with something in the region of 500 - 600 plots (why that number is so vague will be explained later) it is clear that the wait might be a long one. However, some sites have more plots than others, so by choosing a site which is under less pressure (even though it might be further from where you live) you may be able to get an allotment quicker. Got to the ﻿Ashford Borough Council ﻿website to see the list.

However, plots do come up more quickly than you might fear. Why is that?
First, some people try it for a bit then give up quite quickly, while others drop off the waiting list or change their minds when a plot is offered. This speeds things up.

Secondly, plots are getting smaller. Around the time of the Second World War, plots were designed to be big enough to feed a family of five all the the year round. Later, all the biggest plots were cut in half to make the sort of size plot being offered in the 1990s. However, when demand for allotments increased recently, Ashford Borough Council, decided that whenever a larger plot became vacant, it would be carved up into two or three smaller plots. This would cut the waiting list quicker, of course.

Right: plots are shrinking, but they're not yet this small!
Now some people only want a modest size plot, so for them this is ideal. However, anyone wanting a traditional sized plot where they can grow a year's supply of onions and several hundredweight of potatoes will find they do not have the choice - it's a small plot or nothing. Meanwhile, there are vacant sites which have fallen into disuse in years gone by. Unfortunately, it isn't straightforward to bring these back into use, but it would clearly be desirable to do so, as they are currently going to waste, while people languish on the waiting list. Efforts are currently under way to re-open some mothballed sites.
Click here to go to "What is an allotment", which answers (I hope) all your questions.
OK, I understand that. What do I do next?
Noticeboards by the allotment gates will give the phone number 01233 330476. This number goes through to "Streetscene", a department which deals with allotments as well as other environmental things including footpaths and bins. For this reason it is best to use the online form on the Council website www.ashford.gov.uk

Allotment rent is paid in advance, by the year, paid at the end of September. You pay by area. Pensioners and those on mean-tested benefit get a concessionary rate on the first 5 rod (the standard amaount rented out these days to beginners) but pay full price for any land over and above this. Plots are not longer available free, as once was the case.

Currently plots are measured by the rod, and old-fashioned measure of land . In due course the council plans to go over to measuring by the square metre - however this will be a long job as they will remeasure the plots rather than simply doing a paper conversion, to ensure accuracy. How big is a rod? Click here for more.
click here to go direct to council website
At present, you can ask to be put on the waiting list for one particular site, or for any sites. The more options you list, the better chance you have of getting an allotment quickly. However, if you are offered a plot on a particular site you've asked for, you really must be ready to take it, so think before you fill the form in.
Click here to go to the tour of the sites
Once you've been offered an allotment you should decide quickly whether to accept it or not.
If you delay too long you will lose it anyway, and it will be offered to someone else. If you reject a plot you're offered you may not get offered another one quickly. Once you take the plot on, you should do as much as you can to get it 'under cultivation' as soon as possible. This can be difficult in dry summer weather, but you should definitely get on the plot and tidy and clear, even if you can't dig. If you don't make a start after a reasonable interval, you may be sent a "Non-cultivation notice" - a letter which makes it clear you will lose the plot unless you get it cultivated quite quickly - usually within a month. Your plot will be inspected by someone from the council after your month is up.

The council is keen to be reasonable and may well phone you to ask if there are any problems. But it is only fair to others on the waiting list for you only to take on a plot if you are willing and able to make proper use of it.