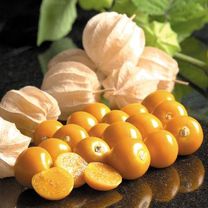 Click on pic for Suttons Seeds
Now very popular with children, and once a rare luxury seen only at exclusive restaurants, the Cape Gooseberry is a close cousin of the 'Chinese Lanterns' of cottage gardens. A tender plant which enjoys the same conditions a tomatoes, this is an easy treat to grow in the greenhouse. Some experts say outdoor plants will crop better, but we've found you get less good results outdoors, even in sunny Kent.

The plants are easy to grow and if you follow the cultivation for tomatoes you won't go far wrong. The same pests tend to affect them, and like tomatoes you can pinch out side shoots to keep the plants within bounds!. Once the fruits start to ripen, however, keep them a bit drier than you would tomatoes.

Given the space, the plants will reach 6ft - but they are much bushier than a tomato. A good choice if you have a large conservatory - they are rather attractive - but a bit of a thug in a standard 6ft x 6ft greenhouse. You could try them in a big pot on a sunny patio outdoors, though; they can be moved indoors as the days get shorter. Chose a 10 litre pot or, if you're short of space, restrict the plants by keeping them in a 5 litre pot.

Like tomatoes, unripe fruit will ripen after picking, so once the autumn starts drawing in, you can collect the fruit and ripen them up in the house. Keep them in the papery calyxes.

There is a similar species, Physalis pruinosa. It may sound tempting as it is claimed to ripen earlier and crop more heavily - however the flavour isn't so good.