There are two kinds of frost, which you will see mentioned both in books and on the weather forecasts.

AIR FROST is what we call it when the actual air temperature drops below zero. Water will freeze and any tender plants will have their leaves blackened as ice crystals form in the tissues. "Hardy" plants have various ways of preventing this happening, so they aren't harmed. If the air just drops below zero overnight, only the very bare surface of the soil will freeze briefly, and the daytime sun will soon thaw out the crust of ice crystals.

However, if the night-time temperatures drop very low, and the air doesn't really warm up much in the daytime, then a prolonged frost results and the top layer of the soil will freeze solid. The longer the frost goes on, the deeper the soil will freeze. This can be bad news for delicate plants in your garden, but on the allotment we usually plan round the cold winter temperatures.

A prolonged frost will make a nasty mess of vegetables like beetroot and turnips, which will weather a brief frost without harm. You can protect crops like these (see more below). On the other hand,many vegetables are improved by frost. A frost triggers the plant's defences, and many plants defend themselves by turning unpleasant-tasting chemicals into ones we prefer, often sweet-tasting ones. This is why parsnips, sprouts and cabbage are all better after a frost.

GROUND FROST is what happens when, on a still clear night, moisture on the ground evaporates rapidly. As you will have noticed when getting out of the sea after a summer swim, a wet surface cools rapidly. A ground frost can cover plants in white crystals and ice up your car windscreen even though the temperature has stayed a couple of degrees above freezing. Ground frosts can occur from early September till the first week in June - that's basically most of the year. Always listen to the weather forecast if you have tender plants out - however, in the Ashford area you need only really worry about ground frosts from mid October to early May, and in some years the first frost won't be till November, and the last one some time in April. It is fairly easy to protect your plants from a ground frost - see below. 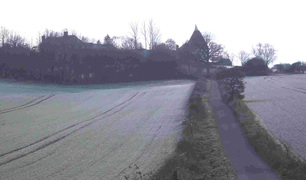 You will need a good thermometer fixed four feet above ground level, in the shade (a simple home-made shade of plywood or tin will do) and ideally facing north east. Note down the temperature, in centigrade, at 2pm, and again at 7pm. Double the reading for 7pm, and then take away the temperature at 2pm. So, for example, if you get + 12 degrees at 2pm and + 7 degrees at 7pm, double the 7 to 14. Take away the 2pm reading (12) from the doubled-up 7pm reading (14) and you get + 2 degrees. This will be the coldest the air gets AT FOUR FEET UP during the night - usually just before dawn. However, a temperature of + 2degC, though above zero, is quite cold enough for there to be a ground frost! You need a temperature of at least + 5degC at four feet up to be sure of no ground frost.

Another example to make things clearer: temperature reading at 2pm 8degC (quite cold). Temperature at 7pm, 7degC (colder, but not that much). Double the 7pm temperature and get 14degC. Take the 2pm reading of 8degC away and get 6degC as the lowest by dawn. As you can see, if the day is already cold, you may be less likely to get a frost than if the day is reasonably warm but the temperature is dropping rapidly at nightfall.

A slight breeze will reduce the chance of a ground frost; on a windy night the air is stirred up and temperatures at ground level will be similar to those higher up. Ground frosts are more definite where the soil is sandy, and less on clay soils. Wet soils, surprisingly, are less likley to see a ground frost than dry ones.

Of course, you may say "get a life!". Your choice . . .
OTHER FROSTY TERMS
A GRASS FROST is a term that is now being used increasingly by television weather forecasters to refer to a GROUND FROST
An IRON FROST is an old country term for a frost which freezes the soil solid to a deep level, so it becomes, in the words of the Christmas carol 'as hard as iron'.
A HARD FROST is just a frost when the air gets really cold - cold enough to kill borderline plants, usually about -5degc
A HOAR FROST is simply one which is very pretty and white, with long, glittering ice crystals sticking to all kinds of surfaces. It isn't any colder than other kinds of frost.
What is a FROST POCKET? Or a FROST HOLLOW? Well, cold air is heavier than warm air, and flows downhill like water to find the lowest point. So in still weather when there is no wind to stir the air up, you can get a frost in a hollow or at the bottom of a valley even if the air higher up the hill is warm enough for there to be no frost.
Don't forget - the soil has its own warmth. Keep the cold air away, and the warmer soil will keep things unfrozen. To be sure you're able to dig or plant in frosty weather, lay insulation on the soil - sacking, newspaper or straw. When you come to prepare the soil, you will roll back the insulation and find the soil unfrozen, even if there is a hard frost making the soil solid elsewehere.

East Kent tends to get some very cold winters, some very mild ones. Often they go in clusters, so we'll get two or three winters so mild that extravagant comments about growing oranges and global warming are bandied around, then a few stinkers that have people talking about a new ice age. The one thing you can predict, is that it will be unpredictable!

﻿It isn't possible to know in advance what kind of winter we're going to have, which makes it hard to plan. Here are some general principles to bear in mind.
﻿
It's not worth going to a lot of trouble to protect tender plants (like tomatoes, peppers or cucumbers) from the cold at the end of the season. The weather is cooling down generally, and plants will be exhausted. Clear them out and get ready for something else. Moving quickly in early autumn means you can take advantage of the last few mild days to germinate a salad crop for winter use, like mustard greens or miner's lettuce. If you have a greenhouse, don't be tempted to try to hang onto the last few tomato plants. Pick the tomatoes and ripen them on a sunny windowsill, they'll have better flavour.

Many root crops will survive the first few frosts of winter unharmed. However, a prolonged frost will freeze the root tissues and ruin them. Beetroot may seem fine until you cook them, when you'll discover they have a mushy texture and unpleasant taste. In a normal winter, laying straw thickly along the rows, covering the roots, will protect carrots, beetroot and so on till Christmas.

Some crops need a frost to fully develop their flavour - parsnips, January King cabbage and sprouts are obvious examples. The frost triggers the plant to turn starches into sugars, which improves the flavour.

In spring, you can warm the ground up for early sowings by covering it with black plastic or weed-control fabric. Prepare the ground then cover it and leave until we have had a few sunnier days. Remove it before sowing the seed.

Come spring, we have to be prepared for mild spells followed by colder spells. Really tender plants like tomatoes are not normally planted out until all danger of frost is past. But sometimes the weather catches us on a hop and a late 'ground frost' is forecast. Newly emerging potatoes are especially vulnerable.
A ground frost, unlike an air frost, is easy to protect against. Because it is caused by moisture evaporating upwards from the ground, any barrier which stops the upwards flow of air will foil it. Protection from ground frost does not need to seal the plants in - it is enough for it to lay lightly on top of them. A sheet of newspaper, a bit of old net curtain - even a bundle of twigs - will give protection. Always listen to the weather forecast, or check it online. If a ground frost is forecast, nip out and protect your tender plants.
Once the sun comes up, make sure you take the frost protection off. You do not want plants to get damp, or to become over-lush under their protection. This could lead to fungal problems.

Some plants you might expect to be tender, such as Coriander, will be fine as long as they haven't just come out of a greenhouse (see Hardening Off Seedlings- click here)

Why frost is good for us

Don't go thinking frost is your enemy. Yes, it can be very inconvenient at the beginning or the end of the season. But frost does more good than harm.